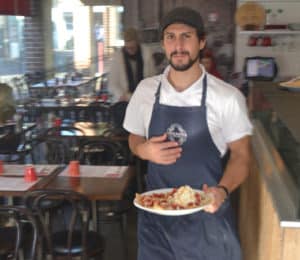 Raphael Tavera (Raph) has been a crucial member of the Four Frogs team for more than two and a half years. During this time he has been instrumental in establishing Four Frogs Creperie’s reputation as the go-to destination for Sydney’s most authentic French crepes (and, more recently, a Mosman “institution”). Raphael appeared on both channel 9’s TODAY show and channel 7’s Sunrise program in 2014, cooking crepes for Pancake Tuesday and Bastille Day. Hailing from Corsica, an island in the Mediterranean Sea southeast of the French mainland, Raph’s been perfecting the art of cooking crepes and galettes for years. When he’s not hard at work behind the crepe pans at Four Frogs Creperie Mosman, he can often be found in the northern beaches surf and riding one of his two precious motorbikes.

Here are some other fun facts about Raphael – and don’t forget to ask him about Batman next time you see him!

Why did you decide to become a crepe maker?

A long time ago, I went to New York where I saw a busy crepe place and it intrigued me. I became very curious about the art of crepe marking and started making crepes by myself, at home, to learn more about it. Since then my passion grew and today I am still very passionate about crepes!

How long have you worked at Four Frogs Creperiee

I’ve been with Four Frogs for 2.5 years already. Time flies!

If you could be any superhero, which one would you be?

What’s your favourite part of your job?

Attention to detail – as well as the satisfaction that comes on a daily basis from our happy customers.

What’s the hardest part about being a crepier?

Being able to cook fast enough and keep both the quality and atmosphere high.

If you could only ever eat one more crepe and galette, which would you choose?

Galette – chorizo, runny egg, swiss cheese and Brie cheese with a side salad.