Four Frogs Crêperie is more than just a French restaurant – we’re a real French crêperie that places high-quality ingredients as a top priority. We’re proud to offer you what we feel are Sydney’s finest and most authentic crêpes and galettes.

We believe the art of crêpe-making requires specific expertise, and that’s why we use the traditional recipes and techniques used by the skilled crêpiers of Bretagne (the region in France where crêpes come from).

Though we have a core menu, we also offer monthly specials. These special menu items reflect the seasonal availability of the varied produce in Sydney. If it is in season, it’s at its prime and will produce a most delicious result.

Everything we do has been carefully crafted for you to experience nothing less than the real tastes and flavours of France when you visit Four Frogs Crêperie.

We’re particularly proud of our galettes and have worked hard to bring their unique taste and quality to you here in Sydney.

These savoury crêpes are created using our own traditional recipe, but what makes them extra special is the highly nutritious buckwheat flour used in its batter. Our buckwheat flour is made using Australian buckwheat which is then milled in-store, at Four Frogs.

Milling the flour at our store maximises its taste, freshness and the nutritional content of the buckwheat – which means you’re eating authentic galettes just like the ones our grandmothers of Bretagne used to cook.

Our sweet French crêpes are thin and crispy on the edges, and soft and light in the middle.

We know you love coffee, and that’s why we created Four Frogs Coffee – a unique blend that reflects the Four Frogs’ values and tastes.

We work closely with a local micro-roaster to produce a full-bodied, rich coffee with a lasting chocolate aftertaste that pairs perfectly with our French crêpes.

Our French crêpes are traditional, but we’ve adapted them to suit your Aussie tastebuds. In France, it’s unlikely that you’ll find crepes with bacon and egg or spinach and feta!

A French Night Out

You may not know that crêpes aren’t just a breakfast treat in France. We eat them throughout the day – especially for dinner. We love to take our families out for dinner and enjoy a delicious galette (or two) followed by a sweet crêpe. If you’ve never eaten a crêpe for dinner, we’d love you to try it for the first time with us!

Our crêperies are open for dinner, and you can view our crêpes menu to read more about our dinner options.

Our founding chef and owner Florian Guillemard was born and raised in Bretagne, the region in France where the crepe originates. He’s passionate about replicating the traditional recipes and experiences offered by the authentic Bretagne crêperies found in his home town – and many a small town in France.

You’ll often see him around in our Randwick, Mosman, Circular Quay and Lane Cove restaurants (don’t be afraid to say bonjour) – and you can also get in touch with Florian and the rest of the Four Frogs Crêperie team here. 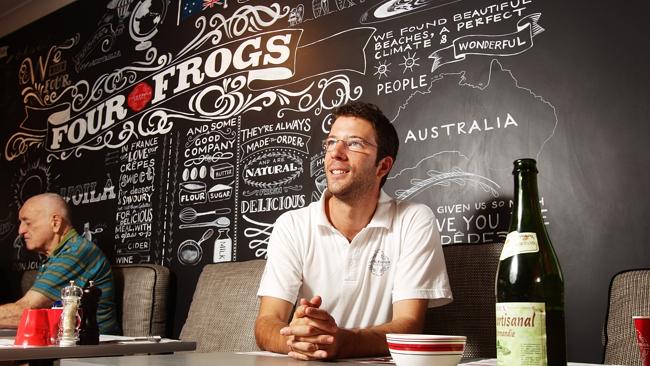