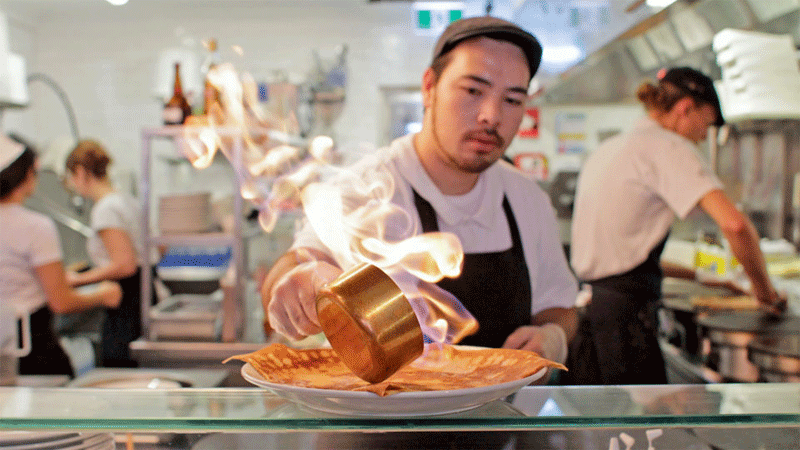 The Crepe Suzette is one of the most famous desserts in the world – but what makes it so special?

It could be down to the Crepe Suzette’s dramatic presentation, served literally on fire. Or the delicious combination of sugar, butter, zest, tangy orange juice and, of course, Grand Marnier, that makes up the tasty “beurre Suzette” sauce.

Whatever the reason for its fame, the Crepe Suzette will undoubtedly always be a favourite among French food connoisseurs and dessert lovers alike.

What is the Crepe Suzette?

Created in Paris in 1895, the Suzette is somewhat of an old-fashioned dish.

Traditionally, it consists of a crepe (or two) along with a sauce, containing:

How is the Crepe Suzette served?

The Crepe Suzette is served flambé. Flambé, which is French for “flamed”, is a cooking technique where chefs add alcohol to a very hot pan, causing a burst of flames.

The flames occur from the combustion of alcohol – and when all of the alcohol has been burned off, the flames die down.

Because there’s not a lot of alcohol added to the dish, the flames only last a few moments. The effect is magical and very entertaining to watch!

Where does the Crepe Suzette come from?

There are quite a few different stories about the origin of the crepe suzette as well as who Suzette actually was – though all stories seem to originate in the late 1890’s. Here are some of the most popular tales:

We offer the Crepe Suzette as a special in addition to our current day-to-day menu, and it’s always the most popular dish on offer when it features. When it’s not on our menu, don’t despair – we always have a variety of flambé crepes on offer as regular menu items at both Four Frogs Creperie Mosman and Four Frogs Creperie Randwick.

Browse our crepes menu online, or contact us to book a table.